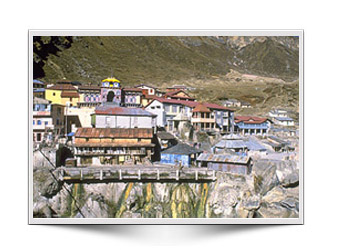 Ek Dham yatra package it covers all of Chardham single shrines Yamunotri, Gangotri, Kedarnath, Badrinath as per according to where you want to go. Ek Dham Yatra is the essential and first step of Chardham Yatra which is placed in the Uttarakhand State of India. It is one of the most famous devotional places in the north India. This place is covered by snow which gives you a feel of traversing through a forbidden land. Chardham Yatra, The Nagari of the Gods is blindly considers the Dham of Moksha. Ek Dham Yatra in form of Badrinath Tour Or Badrinath Yatra with Pleasant Weather Is Really enjoyable. Badrinath is one of the Chota Char Dhams and it also figures in the major Chardham, this occupying a unique place in the pilgrimage circuit of Hindus. In fact, you could earn merit simply by going on a Badrinath Yatra if, for any reason, you cannot complete Chota Char Dham or Bada Chardham Yatras. Whether visitors are on a tourism point or a pilgrim, The Ek Dham Yatra presents you no less of enjoyment and knowledge.