Overview
Kedarnath Temple is a Hindu temple dedicated to Lord Shiva. Located on the Garhwal Himalayan range near the Mandakini River, Kedarnath is located in the state of Uttarakhand, India.
Kedarnath is one of the most important Hindu pilgrimages, named after king Kedar who lived during Satya yuga. Kedarnath is only accessible through hiking since ancient time as per hindu beliefs. It is also part of Chota Char Dham pilgrimage. After Sino-Indo war in 1962 Indian govt. decided to make some important infrastructural developments like roads and highways in here. Thus Kedarnarh become more accessible for the pilgrims. Kedarnath has so many places to visit. 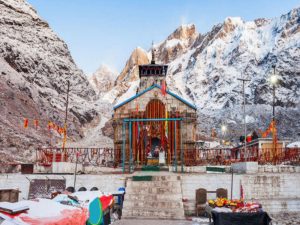 Few of the important places of Kedarnath introduced below:
Gandhi Sarovar
Gandhi Sarovar or Chorabari Taal, located close to Chorabari Bamak Glacier in Garhwal Himalaya region of Uttarakhand State. A lake full of crystal clear water in about distance of 3 km from Kedarnath, the divine Hindu pilgrim land. The legend Mahatma Gandhi’s ashes were immersed in this lake that’s how it got its name in the year 1948.Gamdhi Sarovar is one from the two snouts of Chorabari Glacier. Many travelers comes here to enjoy the amazing sight of greater Himalayan peaks, but mostly in summer time since the only way to reach here is through a tough trekking. Kanti Sarovar is another name of the lake. According to the beliefs, adi guru Lord Shiva has chosen the banks of this lake to transmit yoga to Saptarishis. The best time to get the most scintillating view is during morning hours as the weather of this place may change abruptly.
Phata
Popular for its helipad Phata is often visited by traverlars in order to get Kedarnath by helicopter. Phata is located in the route of Kedarnath in Uttarakhand. It is a small but beautiful village well known among pilgrims.
Sonprayag
‘Prayag’ means confluence because Sonprayag situated in confluence of two sacred rivers Basuki and Mandakini. Sonprayag located in the banks of river Mandakini River in the Chamoli district of the Indian state Uttarakhand. Sonprayag is a proposed Y-forked railway junction on Char Dham Railway because it is connected with Kedarnath and Badrinath through two different railway routes.

Gaurikund Temple
Gaurikund temple got its name from goddess Parvati, as she also known as Gauri. According to Hindu beliefs, in this place goddess Parvati won the heart of the lord Shiva and became her wife by her hard penance and with her strong faith and devotion towards lord Shiva.
Gaurikund
Gaurikund situated at the altitude of 1982 m above sea level and almost 16km trekking distance from divine Kedarnath shrine. As the name suggests this place is dedicated towards lord Shiva’s wife Parvati, there is a temple belonging her name ‘Gauri’.
Vasuki Tal Lake
Vasuki Tal situated at a massive elevation of 14,200 feet above sea level in Kedarnath Dham of Uttarakhand. It is also known as Vasuki Taal which is a high glacial lake. Brahma Kamal and other divine Himalayan flowers bloom around this holy lake, making the aura sacred.
Shankaracharya Samadhi
Adi Guru Shankaracharya ‘s samadhi is located just behind the Kedarnath and it is known as most popular tourist attraction and also most visited place in Kedarnath.
According to the legends Sri Sankaracharya, was a famous Hindu philosopher and also is known as the renovator of the Kedarnath shrine. It is said that in order to propagate his Advaita Philosophy he had made very long journeys throughout India. 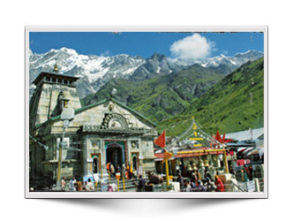 Triyuginarayan Temple
Triyuginarayan is located in the Rudraprayag district of Uttarakhand situated at the altitude of 1980m. It is a well known village and popular in travelers because of its panoramic views of snow covered mountains which makes this place in Garhwal region more gorgeous. As the name suggest the main attraction of this place is the TriyugiNarayan which is also known as Trijugi Narayan temple. It is a temple of the preserver, Lord Vishnu. Its architecture resembles of Badrinath temple.
Bhairav Temple
Bhairavnath Temple is dedicated towards the fierce manifestation of lord Shiva named – Bhairav who is known as god of destruction and devastation. This temple also known as Bhairon Baba Mandir which is located south of the Kedarnath temple on the eastern hill of the lofty Himalayas of Uttarakhand.
Kedarnath Temple
In the indomitable Garhwal Himalayas this divine shrine is standing gloriously. It is situated at an altitude of 3,580mts in Uttarakhand Himalayas. This holy shrine is known as one of the twelve Jyotirlingas of Lord Shiva and this is also a part of Char dham pilgrimage. This devine temple is counted among with the 275 Paadal Petra Sthalams(most powerful Shiva temples in the world) and also the most important in Panch Kedars.

Rudra Cave Kedarnath
Constructed by the Nehru Mountaineering Institute Rudra Cave is an underground meditation cave. It is situated at one and half kilometers left from the Kedarnath Temple and this is a part of Garhwal Mandal Vikas Nigam’s Guest houses chain. In order to provide the devotees a peaceful spiritual practice this cave is built at the other end of the Mandakini .
To reach Rudra cave is situated almost in 1 km trekking distance of Kedarnath town, which is perfectly connected by and roads railway with other parts of India.

Kedarnath Temple itself is a good enough reason for pilgrims to visit Kedarnath. But Kedarnath has so much more that a mortal need to witness in their life at least once. Because of this reason every year thousands of peoples visits Keadrnath to Witness its grace.

0
Char Dham Yatra is one of the largest journeys of spirituality that you simply will absorb in the Republic of ...
View more